Jochem Herrmann, co-founder and Chief Scientist of the Dutch camera manufacturer Adimec is the new President of the European Machine Vision Association (EMVA). Herrmann has been EMVA Board member since 2013 and takes over the presidency from Toni Ventura-Traveset (Datapixel, Spain), who has been the dedicated leader of the association through a phase of transition. The Board and the General Manger thanked Toni Ventura for his successful work and continuous support of the EMVA since its founding in 2003. “The transition period now clearly lies behind us and for EMVA it is now time to expand our activities and further grow the association. I am looking forward to further develop EMVA together with my fellow Board members and the whole EMVA team”, said the newly elected president in his first statement.

Furthermore, the EMVA members elected an extended Board of Directors during the General Assembly on 11 June in Athens. New members of the Board are Dr. Kai-Udo Modrich, Managing Director of Carl Zeiss Automated Inspection, and Prof. Dr. Bernd Jähne, who heads the Heidelberg Collaboratory for Image Processing of Heidelberg University. The EMVA members also confirmed the previous Board members Gabriele Jansen (Vision Ventures, Germany), Michel Ollivier (Tiama, France), Toni Ventura-Traveset (Datapixel, Spain) and Dr. Jean Caron (Euresys, Belgium). Michel Ollivier is new EMVA Vice President, and Dr. Jean Caron takes over the position as treasurer. Dirk Käseberg (Mettler-Toledo Garvens, Germany) has resigned from the Board to concentrate on increased responsibilities in his company, but will continue to work closely with the EMVA Board in a less formal manner. 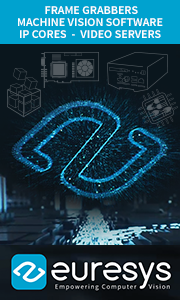